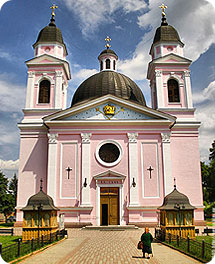 From the street lord (present street. O.Kobylianska) departs Cathedral Street, which leads us to the biggest worship Bukovina – Cathedral of the Holy Spirit.

The cathedral was built in the style of late classicism during 1844-1866 years. Author of the project – a prominent Viennese architect Ferdenant Real (Roell). The building consists of a nave detained, Bukovina typical religious architecture, and two identical bell at the main facade. Above the main entrance to timpans on blue background, placed on the crown and crossed the metropolitan stick cross. Internal disclosure tall space goes to the full height of the central nave and dome. The interior was decorated by the Viennese group of artists led by Charles Yobstom. The paintings are made in the spirit of academic, oil on plaster. At first it was one of the candidate projects St. Isaac’s Cathedral in St. Petersburg. Such a structure can not strike.

On the opposite side of Cathedral Square is situated, which gradually turns into Cathedral (formerly Austrian) area. It is the largest city square. Once there was a vacant lot where organized fairs are accompanied by music, entertainment and turmoil. His suit in the summer every year for 14 days. In the temporary wooden platforms, right in the open, were itinerant artists and folk music. 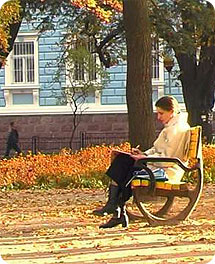 n the center of the area to 100 – anniversary of the capture of Bukovina by Austria was installed a monument that symbolizes Austria. His height was more than 8 meters, the main figure in white karavskoho marble reliefs of gold. It was then, this area has become an area of ​​Austria. This official name as a monument there to the Romanian occupation of 1918. In Soviet times on the same area obelisk was erected Victory (1946). A blue four-storey building near the obelisk – the building of the former Bukovina Landtag (provincial government agency). The building was prepared together with Josef Hlavka Haubitsom. The very structure is made in strict classical forms between 1869-1873 years. The columns of the central projection in the facade, tambourines and sandraky over the windows of the second floor – all this gives the building solemnity and majesty. Now here is the fourteenth housing Chernivtsi National University.

A quiet street on a university building, named Omelian Popovic leads to pseudo Jesuit church of the Heart of Jesus, built in the years 1891-1894 in the area Ferdenanda thanks to the efforts of missionaries from the Society of Jesus. The project developed a church school director Chernivtsi crafts professor J. Lyayzner. The internal space of the house, which housed 800 people, wedded their rib arches that lean on the pillars. The interior of the building in the past decorated with icons of outstanding masters of the late XIX beginning. Twentieth century. Numeral figure molded, cast bronze candle pompous turns that “prosiyuyuchy” light, creating a festive and relaxing mood. He immediately became the gem of the city. Its tall spire visible from all ends of Chernivtsi, charming the audience with their majesty. Slender forms of neo-gothic elegant interior, colorful stained glass windows, a majestic body – all this gave the church a kind of Western flavor. Currently the church premises used by the State Archive of Chernivtsi region.