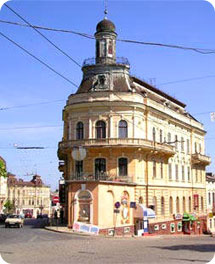 From the church, and then we go up to the first buildings of Chernivtsi – “general house”.

At the time of initiation of Bukovina to Austria (1774) Chernivtsi numbered about 290 houses, mostly built of wood, which gave, according to Karl Von Entsenberha, the city poor appearance. With the appointment of Karl Von Entsenberha Governor General Bukovina and start reforms encouraged resettlement in the land of artisans and traders. The increase in population led to its expansion to the south.

In 1780, at the corner of School Street and modern helmet -Aleyhama was built the first brick house – “general house” residence of the governor general.

First catches the eyes of the house on the corner of Main and Sholom Aleichem, Chernivtsi known as old-timers “Shifa” (from the German Schiff – ship). In the late eighteenth century. this quarter was inn “gold ship”. In the late nineteenth century. in the same quarter was built that resembles a ship, on both sides which rivers flow -vulytsi. Indeed, the building looks like a ship that its original appearance contributed to the birth of romantic legends. 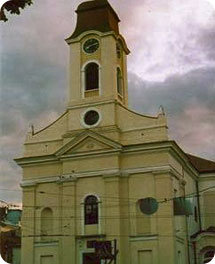 Opposite this house-ship we can see the Roman Catholic Church of the Exaltation of the Holy Christ. Its construction started in 1787. Because of errors builders facade of the building from time to time zavalyuvavsya. Only in 1814 the construction works were finally completed, however, during the great fire of Chernivtsi in 1866 greatly affected the church tower, which at one time was used as an observation post to detect fires. Also on the facade of the church is a sundial, which still displays time Vienna.