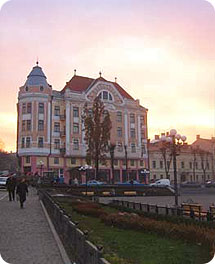 It became a center of musical life of the city, here in 1876-1877rr. It was built house Bukovina Musical Society (Philharmonic), which gave concerts Lysenko, A. Rubinshtey, Sidi Tal and hundreds of celebrities Soviet era and the present day. Square ensemble clearly distinguished former hotel “Bristol” with stylized tower, located in the basement which is a first-class restaurant.

On the 598 anniversary of the city in this area was set musical fountain is well blended into the ensemble of the square in the evening is going to a lot of residents and visitors in order to admire the play of water and light music. 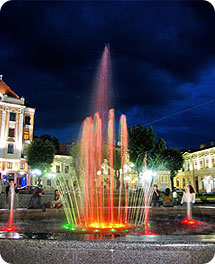 From the square street Khudyakov (col. Posting) leads to a historic building post office. This is one of the best, according to contemporaries, buildings in the city -sporudzhena 1884-1889 biennium. In neoclassical forms with figures of Greek mythology at the 2nd floor and watch over the main entrance, it is still admired by Chernivtsi city.