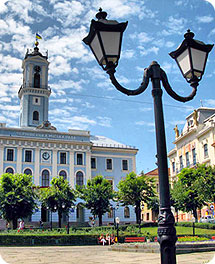 Walking away from the post office we can easily go to Central Square Chernivtsi “Market Square”.

The first urban architects could not ignore the main function of which for centuries served Chernivtsi, customs serve the international trade route from Western Europe to the Levant. The most hamirlyvyy market became the basis of the first structured area, and hence architectural ensemble. Since 1825 there began to enter into the pavement, and the second half of the century the area began to take its unique look. It was not only hamirlyvym bazaar, but also the center of city life.

The central building of the architectural ensemble of the area is City Hall, which is considered the “heart of the city.” It was built 1843-1847 biennium. Designed by Andrew Mikulich in the style of late classicism. In terms of compositional structure made traditionally City Hall. The house is close to the square and courtyard. Above all building rises two-tiered tower with a balcony, decorated clock and copper spire of the flagpole. By the 20’s. Twentieth-century tower crowned gilded eagle three meters in height. During the repair work in 1903 in the ball during an eagle and laid 20monet letter to posterity. The fate of the relics in the case is not known. Eagle Russians withdrew in 1916. 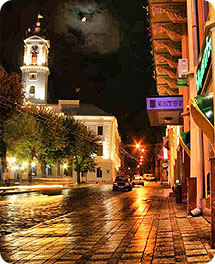 Near the town hall, in the heart of the city is building that impresses even quite far from the art and culture alien to the capital of Bukovyna in 1900-1901rr. erected in one of the most beautiful buildings throughout the Austro-Hungarian Empire, facilities management Bukovinskoy Savings Bank (now the Art Museum premises) in the style of Viennese Secession. «Bukowiner Sparkass» reduced Hyubert Gessner, a student of his father secession, Otto Wagner. Among facade decorations isolated mosaic is 12 ancient gods symbolizing royal 12 provinces of Austria-Hungary Austria shows herself as a girl in a purple chlamys in the center panel, and Bukovina symbolizes a young horse.

Here in the present Chernivtsi Trade and Economic Institute still located hotel “Under the Black Eagle”. In which housed one of the best restaurants in the city. Opposite him was another hotel “Golden Lion”. centr_plosha3Iz oldest buildings in ploschizalyshyvsya hotel “Paris” (now shop “products for young people”) Next, on the corner of Central Square Kobylianska and please the eye and now the building of the former cafe “Habsburg” with interiors setsysiynymy no worse than in Vienna or Paris . Now there is a branch of the National Bank of Ukraine.
Opposite the coffee house we can see the building of the former hotel “Belle View” that is “beautiful view” and indeed from the balcony of the hotel a beautiful view of the entire area of ​​the market that has been a favorite meeting place and walks Chernivtsi, a kind of “city hotels “. Today the central area has not lost its attractiveness and beauty is one of the best areas in the city.