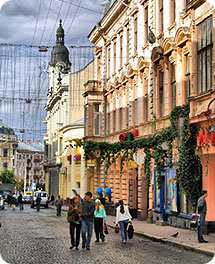 On the central square originates one of the most beautiful cities of the arteries – a pedestrian street ensemble Olga Kobylianska former Panska (Herrengasse).
“This street, which swept bouquets of roses, which were not allowed in dirty shoes.” That’s because every morning street cleaners washed the pavement and sidewalks with warm water and soap. When the villagers brought hither agricultural products, the nayporyadnishi are carefully wiping shoes at the entrance to this street. Here were are the most fashionable shops, restaurants, coffee shops, cafes and shops and cinemas, banks, etc. Walking it is possible to get to the Chernivtsi Regional Museum. This is the treasure house of ancient monuments Bukovina. There are more than 84 thousand. Items, including archaeological sites, natural materials, printed books weapon and many other things. 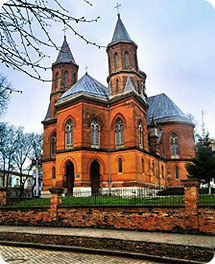 From Kobylianska can go down to the historic Armenian Armenian quarter of the Armenian Catholic Church of the Holy Apostles Peter and Paul, erected by architect Josef Hlavka. The temple itself was never active for just before his consecration in the church priest hanged himself and thus desecrated the church. Now this hall of Organ and Chamber Music where often heard classical melodies.
Opposite the Armenian Church is another historic building, which is linked to a historical life – Ukrainian People’s House, opened in 1887. For Austria and Romania, it was the center of Ukrainian culture. It contained a long newspaper “Bucovina”, which was printed the first book of Mark Cheremshyna. Ivan Franko read here before the public their works. Paintings assembly hall on the second floor are outstanding Ukrainian malyartsi Augusta Kochanowski.

Descending down a little street M.Lomonosova we go out into the street where the building n “n” and “drunk” churches …