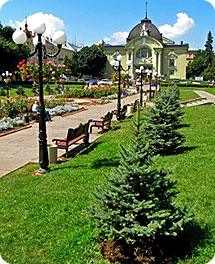 Descending down a bit we go on Theater Square.

Even some two centuries ago this place – hard to believe! – Noise dense forest. In 1800 Chernivtsi City Council had to issue a special circular organization in this area roundup wolves. H1H century. the recent urban neighborhood that became known as loudly area of ​​Elizabeth, deployed military stores of provisions. With a full flourishing trade in the ancient city square “occupied” fish traders. Nepotamovnyy smell and suggested appropriate popular name – Fishing area, or as they called Chernivtsi burghers, Fishplyats. Later, the area began to be built multi-storey stone buildings. In the postwar period, when it was finally completed construction area turned out that the theater building, which once dominated the square, as if dissolved among other facilities. Then Chernivtsi architects decided to omit the middle of the square by 2.5 m., Which made the whole ensemble perfection and originality.

And today in the ensemble square has another bar – “Avenue of Stars”, which contains dozens of names of famous singers and musicians who started their ascent on the big stage in Chernivtsi. It was and still is a favorite spot of the young. The most beautiful buildings of this area and is Chernivtsi Chernivtsi Theater Olga Kobylianska.
Chernivtsi Theater – a dream of velvet and gold, designed by Viennese architects Helmer and Felmerom. Yet they were invited to work in Chernivtsi just after they were built for projects theaters in Vienna and Odessa. 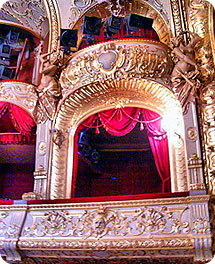 “Chernivtsi theater – the monument of culture Chernivtsi citizens aware that they feared most of all to acquire the reputation of the province and passionately wanted nothing to give distinguished Metropol Vienna.” So wrote German writer Georg Hayntsen.

Sam theater built on the site of the old municipal theater in the years 1905-1909 by architects from Vienna Helmer and F.Felmerom Secession style. But here you can see the features of other styles, including Renaissance, Baroque, Classicism. Dome Theater vyvershuye statue of Melpomene, the main façade is decorated with bas-relief scene from Sophocles’ Oedipus the King and “and bas-relief medallions Shakespeare and Richard Wagner. Like other theater facilities, Chernivtsi theater is also decorated with busts of famous playwrights and composers of different eras and nations. Once the theater towering monument Schiller is in this place is a monument to Olha Kobylianska opened in 1983.

To the right of the theater is the former home of the Jewish national home, built in 1908rotsi psevdobarokkovskomu in style by Lviv architect Tadeusz Lewandowski. Next to him stood a monument of architecture of Constructivism – Former Romanian National House, built in 1938, designed by Ion Nanesku. On the opposite side, surrounded two houses twin, emblazoned house Chamber of Commerce, built in 1910 in Art Nouveau style (now there is Bukovina State Medical Academy). The project was competitively prepared Friedrich Hotelmanom. The facade frieze in the center of which we see sculptures of Greek gods – Mercury and it Gaia, the patron of travel and trade. In their hands – a horn of plenty. For facade panels are enamelled with symbols crafts.
Near the square in the eye catches a huge white building that gives the impression of an unfinished building. This cinema “Chernivtsi”, which was once the biggest and best in the synagogue. Chernivtsi called it simply “Tempel”, ie the temple. The building was unique, contemporary struck by the harmony of its forms. It was made in the Moorish style, high walls crowned light square towers – minarets which ascended up on mighty dome decorated with gilded ornaments. In the children’s choir of the “Temple” began his career as a singer Josef Schmidt, whose song “went around the world.” During World War II the synagogue was destroyed, and the war on its ruins built cinema.

From the cinema “Chernivtsi” departs University Street, leading to the band’s masterpiece old Chernivtsi – Chernivtsi University (the former Metropolitans residence). On the same street are also the first two buildings of the university …